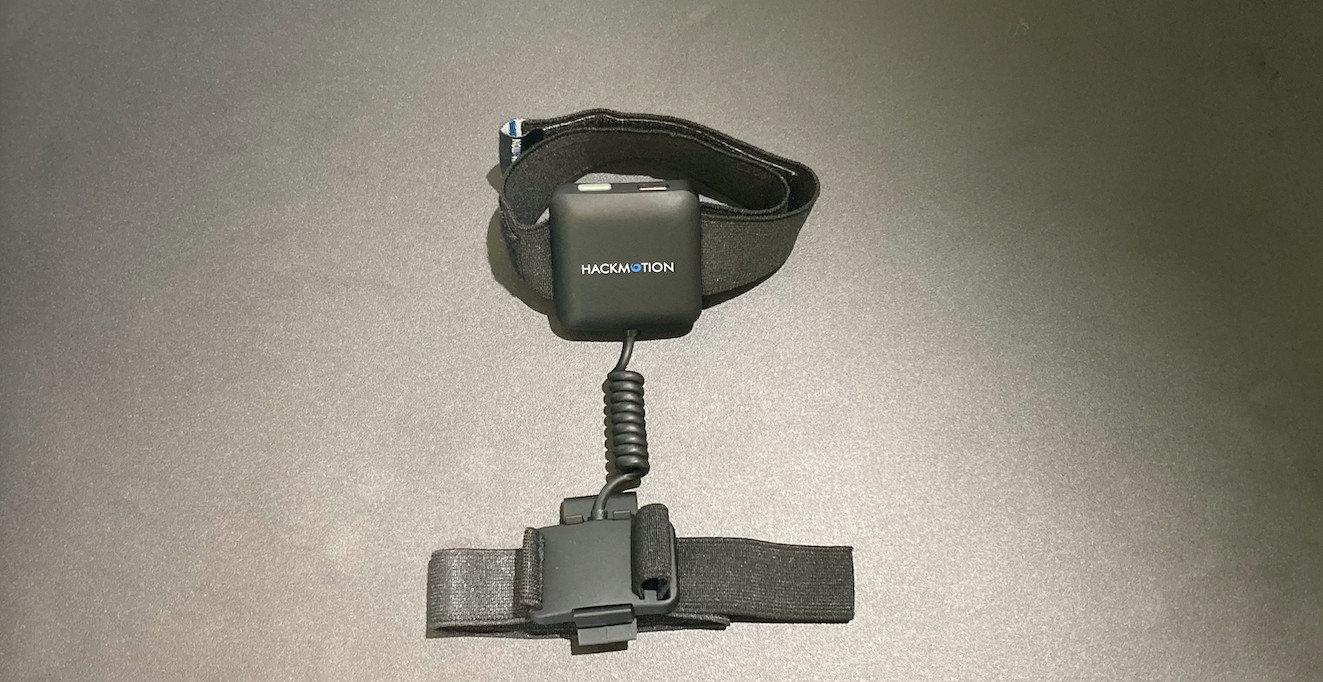 For many years wrist mechanics were poorly understood and there was no simple way to measure them, despite their importance for accuracy and distance. However, we now have HackMotion that specifically focuses on wrist mechanics – applying their tagline “Measure, don’t guess”.

Here we review the HackMotion sensor, test HackMotion’s accuracy and discuss who will benefit from this new piece of tech.

HackMotion is a swing analyser/training aid that attaches to your forearm and hand to provide detailed feedback on your wrist mechanics. It pairs with your phone via Bluetooth, providing a mini coaching studio for you during practice.

How does it work?

Understandably, HackMotion keeps how their device works a closely guarded secret. The device likely contains a gyroscope, magnetometer and accelerometer in both units, one attaching to your forearm and the other to your hand.

Having these devices positioned on your wrist and forearm allows one output to be subtracted from the other to calculate the angles of your wrist at a given point in your swing. It directly measures wrist flexion-extension, radial-ulnar deviation and estimates pronation-supination (rotation).

In less than a minute you can attach the device to your arm, calibrate, and start getting data on your wrist mechanics during your golf swing.

HackMotion allows you to see this data visually, in a graph, or as key numbers at address, top of swing and impact. After a few swings, you can start to analyse patterns and differences in your swing to help explain shot patterns or inconsistencies.

This is where HackMotion starts to get really exciting. In the past, we would have to suggest a wayward golf shot was down to ‘poor timing’. Whereas HackMotion allows you to measure the change in your release pattern and then diagnose:

Along with the swing analysis mode, HackMotion offers a club face control mode. Here you can hit shots with feedback given when wrist angles fall outside of set ranges. The audio feedback lets you know in real time when you are inside the ideal range.

This training mode is brilliant. It allows you to customise ranges of motion, when feedback is given and will certainly accelerate your rate of learning.

HackMotion also allows you to measure both lead and trail wrist angles – this is a small but useful extra feature. The wrists ‘should’ follow similar patterns if they both stay on the club, but from previous biomechanics research (unpublished), I can tell you there are often subtle differences, particularly in pronation-supination between the lead vs trail arm as you approach impact.

On top of the full-swing data, HackMotion offers a separate putting analysis mode. Improving putting wrist mechanics can be a really easy win for both amateur and elite players, so this mode should not be overlooked!

There are two versions of the HackMotion sensor. These both use the same hardware, but differ in the software and features offered. The Player version is a lite version of what you get in the Pro (what we’ve covered above), watch the video below for a full review of how these two differ.

I know HakMotion’s aim is to produce a more affordable version of the system for players, but I feel anyone serious enough to opt for the Player version should go for the Pro to get the full data sets and features.

This was the part of the review I was keen to create and share. Many coaches and players will use this device for hundreds of hours, but how accurate are those numbers?

Testing this product was tough (without access to a $100k biomechanics lab) but I’m pleased with how we went about it and our findings. The full testing protocol and results can be found here. In this section, we’ll cover the key findings.

The key findings are as follows:

It is challenging to explain how difficult it is to do what HackMotion does, so the results above are impressive.

As a coach and player, don’t focus too much on 0-3º changes between swings. However, changes outside this range are meaningful and real. This data has confirmed that HackMotion is a great tool for understanding your release mechanics and improving them over time.

There is no doubt that HackMotion is useful – wrist mechanics are an important aspect of golfing performance. However, you do need to know why you are going to use HackMotion and what you are aiming for with your analysis.

Also, be aware that release patterns are often the result of body mechanics and pre-swing factors (grip & posture). So working on your wrist mechanics without a wider picture of your swing isn’t ideal.

Once these boxes are checked there are so many use cases for HackMotion:

There are many use cases outside this range, but anyone investing time in the areas above will benefit from learning more about wrist mechanics and using HackMotion.

HackMotion’s software not only helps players diagnose, but supports them as they develop. Below is a simple workflow for using HackMotion:

The ability to take HackMotion out onto the golf course is one that is often overlooked but makes it very special. Many golfers struggle to take range form onto the course and HackMotion allows you to identify if wrist mechanics are the culprit.

HackMotion is a tool that allows coaches and players to get a deeper insight into their swing mechanics and performance. This high-tech swing analyser isn’t for everyone, but when relevant HackMotion is one of a kind, with a brilliant app full of features to help golfers on their journey to better golf.

I hope you’ve found our Hackmotion review useful. Golf Insider readers can get a small saving when buying direct with HackMotion with the coupon code: GolfInsiderUK