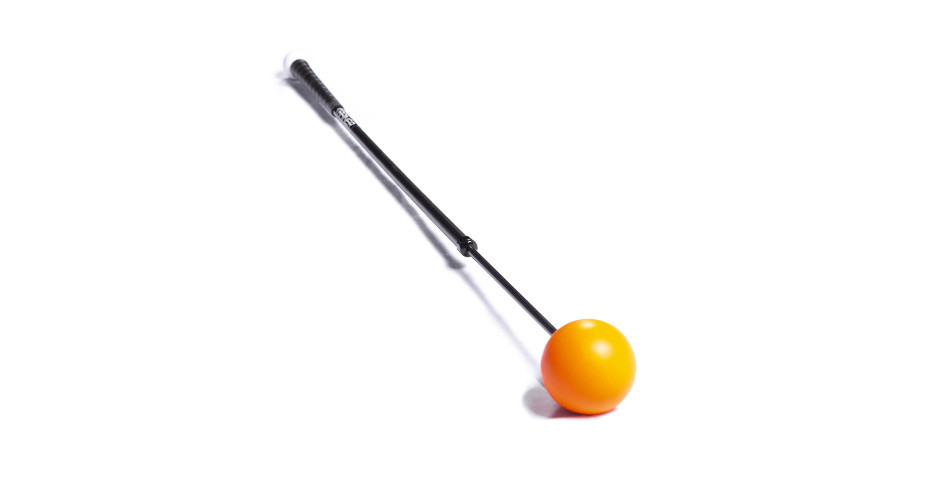 The Orange Whip training aid aims to improve tempo and performance in golfers. Here we review the product, what it does, and if it works. The benefits of the orange whip include improved tempo, balance and increased distance on your shots. Thousands are sold each year, so should you join the list of golfers swinging the Orange Whip?

What is the Orange Whip?

The Orange Whip is a heavy ball on the end of a flexible shaft with a counterweight at the other end. The goal of this product is to better your balance, rhythm, tempo, and power in order to provide you with an improved golf game.

The backstory of the Orange Whip

The backstory of the Orange Whip helps explain who this is for. Professional coach, Jim Hackenberg, developed this concept for his students who were tense, tight and chopped down on the golf ball. Resulting in a steep swing plane and often pulled and sliced golf shots.

The Orange Whip was designed to help these golfers swing the golf club with a smooth tempo and relaxed grip. After using the prototype in his lessons students kept asking if they could buy one – hence the Orange Whip was born.

Does the Orange Whip really work?

To answer if the Orange Whip works we need to think a little deeper about how golf training aids work.

The Orange Whip, or any training aid, can’t magically fix your golf swing. Instead, they give you feedback on your swing, and/or change the constraints of practice to shape the way you swing.

The extra weight has the effect of pulling against your arms as you start your downswing and try to pull down on the club handle. This slows down your arm swing and encourages you to rotate your body towards the target as you start down.

I like to call this sequencing rather than tempo or timing, and when swinging the Orange Whip you really will notice a difference in your sequencing.

Will this transfer to hitting a golf ball?

This is the catch – the Orange Whip allows golfers who really struggle with their sequencing to make great movements in training, but you will still require a lot of practice switching between your driver and Orange Whip to gain the transfer.

It sure is possible, and the Orange Whip gives you a great feeling to take onto the golf course, but you’ll still need to practice.

The Orange Whip does indirectly help many golfers shallow their swing plane. Using less arms and more body rotation early in your downswing will flatten your swing plane.

The short answer is yes, for most golfers. Golfers often take part in very little physical training, as a result, almost any training stimulus will likely have a positive effect.

The added weight of the Orange Whip will provide a small training stimulus. The change in sequencing may also increase your clubhead speed. If you are specifically looking for gaining swing speed and distance I would suggest a personalised training program or checking out the SuperSpeed Sticks.

What options are available to buy?

Which Orange Whip should I buy?

If you wish to get the best transfer to your driver swing and are 5″10′ or taller go for the standard model (slightly longer than a standard driver). For men and women under 5’9″ you may wish to opt for the mid-size option (1.5′ shorter than a men’s standard driver).

The compact version is best for those wanting to practice indoors. I’ll leave you to check your ceiling height and clearance during your backswing and follow-through.

Is the Orange Whip good for beginners?

The Orange Whip is good for golfers of all skill levels who specifically struggle with their sequencing. However, I would advise all golfers to check their golf swing basics before purchasing.

If you have a very weak golf grip or an upright posture, the Orange Whip will never result in a long-lasting change to your sequencing and swing path – fix your technical fundamentals first.

If you’d like more of an idea about drills you can do using the Orange Whip then check out the video below. The video starts with two warm-up drills, followed by a useful release drill, before finishing with full swings with the training aid.

The Orange Whip is the original swing aid in this area. Since there have been a few copycat products.

It is okay but feels like a cheaper alternative.

If you are specifically looking for a swing aid to help you with wrist hinging and release then check out the Swingyde training aid. This serves a different purpose to the Whip – for full-body sequencing opt for the Orange Whip. For wrist hinging and working on your left wrist position go for the Swingyde.

Getting better at golf can be challenging, golfers are always on the lookout for new ways to improve. Whether you choose golf launch monitors, swing analyzers or the Orange Whip, you’ll still have to put in some focused practice.

The Orange Whip provides golfers with a great tool to gain feedback on the sequencing of their golf swing. If this is something you struggle with or would like to improve, then the Orange Whip is a great product.